"The VOTE IS PRECIOUS.

Voting Rights Guide for People
in the Criminal Justice System 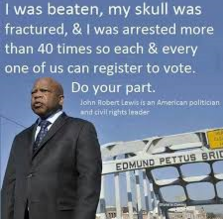 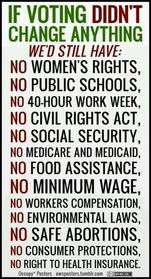 The History  of Voting

One of the most important rights of American citizens is the franchise — the right to vote. Originally under the Constitution, only white male citizens over the age of 21 were eligible to vote. This shameful injustice has been corrected and voting rights have been extended several times over the course of our history. Today, citizens over the age of 18 cannot be denied the right to vote, regardless of race, religion, sex, disability, or sexual orientation. However, in every state except North Dakota, citizens must register to vote, and laws regarding the registration process vary by state.

The path to full voting rights for all American citizens was long and often challenging. The franchise was first extended to African Americans under the Fourteenth and Fifteenth Amendments to the Constitution, passed during the Reconstruction period after the Civil War. These guaranteed that all male citizens, regardless of their race, would receive equal treatment under the law and not be deprived of their rights without due process. The Fifteenth Amendment is specifically dedicated to protecting the right of all citizens to vote, regardless of their race.

For practical purposes, this was not the end of the voting rights struggle for African Americans. Because of widespread discrimination in some states, including the use of poll taxes, grandfather clauses, and literacy tests, African Americans were not assured full voting rights until President Lyndon Baines Johnson signed the Voting Rights Act in 1965.

Women were denied the right to vote until 1920, when the Nineteenth Amendment was passed. Prior to that, women had only been able to vote in select states.

Federal elections occur every two years, on the first Tuesday after the first Monday in November. Every member of the House of Representatives and about one-third of the Senate is up for reelection in any given election year. A presidential election is held every fourth year.

Federal elections are administered by state and local governments, although the specifics of how elections are conducted differ between the states. The Constitution and laws of the United States grant the states wide latitude in how they administer elections.

To register to vote in North Carolina, you must meet the following qualifications:

Be a U.S. citizen;
Live in the county of his/her registration, and have resided there for at least 30 days prior to the date of the election;
Be at least 18 years old, or will be by the date of the general election. 16- and 17-year-olds may preregister to vote.

17-year-olds may vote in a primary election if they will be 18 at the time of the general election; and

Not be serving a sentence for a felony conviction, including probation, parole, or post-release supervision. Once an individual has completed a felony sentence or been pardoned, he/she is eligible to register and vote. No additional documentation is needed. For more information on voting rights for those in the North Carolina criminal justice system, click here.

Black suffrage refers to black people's right to vote. Black suffrage has long been an issue in countries established under conditions of black minorities. Black men in the United States did not gain the right to vote until after the Civil War. In 1870, the 15th Amendment was ratified to prohibit states from denying a male citizen the right to vote based on “race, color or previous condition of servitude." "Black suffrage" in the United States in the aftermath of the American Civil War explicitly referred to the voting rights of black men only. Black women still had many hurdles to face before obtaining this right.

The passage of the 19th Amendment, which was ratified by the United States Congress on August 18 and then certified as law on August 26, 1920 technically granted women the right to vote. However, the 19th Amendment did not initially extend to women of African American, Asian American, Hispanic American and American Indian heritage because of widespread enduring inequality and racism from within the ranks of the women's suffrage movement. It wasn't until the Voting Rights Act was passed nearly a half century later, on August 6, 1965 that black women were officially allowed to exercise their right to vote.

[From Wikipedia, the free encyclopedia]