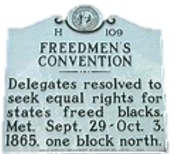 ​On Liberty and Slavery

​Alas! and am I born for this,

To wear this slavish chain?

Deprived of all created bliss,

Through hardship, toil and pain!


How long have I in bondage lain,

And languished to be free!

Alas! and must I still complain—


Oh, Heaven! and is there no relief

This side the silent grave—

To soothe the pain—to quell the grief

And anguish of a slave?

Roll through my ravished ears!

Come, let my grief in joys be drowned,

And drive away my fears.

And let the joyful trump of peace,


Soar on the pinions of that dove

Which long has cooed for thee,

And breathed her notes from Afric’s grove,

The sound of Liberty.

So often sought by blood—

We crave thy sacred sun to rise,

The gift of nature’s God!

I scorn to see the sad disgrace

In which enslaved I lie.


Dear Liberty! upon thy breast,

I languish to respire;

Unto thy boughs I flee—

And in thy shades the storm shall calm,

With songs of Liberty!

Months following the Civil War, freed slaves held meetings throughout eastern North Carolina which led to a statewide convention (The Freedmen’s Convention) in Raleigh, on September 29-October 3, 1865. The meeting at The African Church, the site of present-day Saint Paul African Methodist Episcopal Church, consisted of 106 delegates from 34 of the state’s then 89 counties resolved to seek freedmen’s equal rights with whites, especially serving on juries, acting as their own counsel, and voting in elections.

Juneteenth, also known as Freedom Day, is an American holiday that commemorates June 19, 1865. On this day, after almost two and half years since the implementation of the Emancipation Proclamation, enslaved African Americans were informed of their liberation from the slavery present in the former Confederate States of America. Texas was the most remote of the slave states, and the Emancipation Proclamation of January 1, 1863, was not enforced there until after the Civil War had ended. The name of the observance is a portmanteau of "June" and "nineteenth", the date of its celebration.

At first, celebrations involved church-centered community gatherings in Texas. It spread across the South and became more commercialized in the 1920s and 1930s. Often the centerpiece was a food festival. A third stage was reached in the Civil Rights movement of the 1960s when the focus became the story of struggle for postwar civil rights. The 1970s saw a fourth stage which returned the focus to African American freedom and arts. By the 21st century, Juneteenth was celebrated in most major cities across the United States. Activists are pushing Congress to recognize Juneteenth as a national holiday. Juneteenth is recognized as a state holiday or special day of observance in 46 of the 50 states.

Our Mission:  To celebrate the freedom of formerly enslaved African Americans by acknowledging their        history and achievements through commemorative and historical services and activities.

To find out how slavery
started in America
Click Here